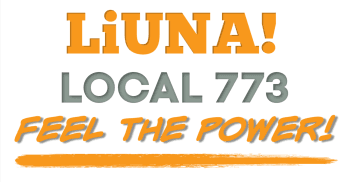 Join the LiUNA! Action network to get involved - it's your union! Learn more by signing up with LiUNA!

“We’re proud that through collective bargaining, LIUNA has provided generations of our members a pathway to the middle class. That work is part of a broader struggle for justice, and we will never back up, never back down, never retreat, and never surrender in the never-ending battle for workers’ rights, for immigrant rights, for civil rights, and for human rights.” Terry O'Sullivan, LiUNA! General President

From pay to training to retirement, LiUNA! members live better.

Men and women working in the construction industry see the difference a union makes in every paycheck.

The average wage for a union-worker is $28.08, compared with $18.10 for a non -union worker, according to the U.S. Bureau of Labor Statistics.

A heavy-highway LIUNA worker averages $41.94 an hour in wages and benefits, compared to $18.93 for non-union Laborers, according to Engineering News Record’s Construction Economics Department. In the jurisdiction of Local 773, the wages are even higher for a construction craft journeyman Laborer at $57.25 per hour.

A union helps neutralize pay discrimination. The most recent report from the Bureau of Labor Statistics shows:

For women in a union, the weekly pay advantage is 32% over non-union women in the workforce.

For Hispanic union workers, the weekly pay advantage is 42%.

For African American union workers, the weekly pay advantage is 33%.

LIUNA has one of the best continuing FREE education systems in the world.

With dozens of courses that open the door to new opportunities and provide members with valuable skills.

Classes are available in every state in the U.S. and every province in Canada.

LIUNA members are safer on the job.

Members are empowered with the ability to speak out about workplace hazards.

Members are provided with training in order to recognize potential hazards.

Workers within a union also have an advantage when it comes to HEALTHCARE and RETIREMENT.

85% of union workers have health care insurance which includes medical, dental, vision and prescription drugs compared to the 54% of non-union workers.